Peter Boockvar:
Bottom line, job growth continues but the pace needs to pick up at a faster rate and remains below where it should considering the sharp declines seen in ’08-’09

Mish:
This was a solid jobs report, not as measured by the typical recovery, but one of the better reports we have seen for years. Moreover, 30,000 government jobs bit the dust. The higher that number, the better off we will all be. +212,000 private jobs is a good number. However, I suspect this may be as good as it gets for a while.

At the current pace, the unemployment number would ordinarily drop, but not fast. However, many of those millions who dropped out of the workforce could start looking if they think jobs may be out there. Should that happen, the unemployment rate could rise, even if the economy adds jobs at this pace...

Were it not for people dropping out of the labor force, the unemployment rate would be over 11%...

Looking ahead I strongly doubt the reports will be this good over the course of a year. 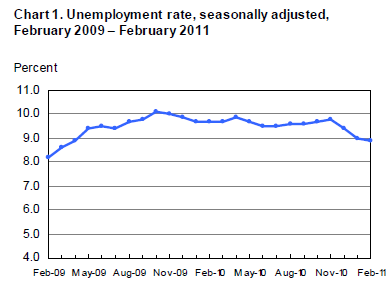