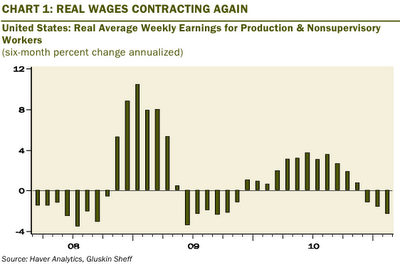 Once the effects of fiscal stimuli wear off, this negative income trend will show through in a much more visible slowing in real consumer spending that we doubt the markets have fully discounted. So far, what has happened in equities has been treated as a financial event — just wait until the economic event follows suit.

Update 3/19: I [Rosie] pointed out in early March that the most recent nonfarm payroll report, while interpreted as quite bullish by the masses, was really a disappointing post-January rebound that left the January- February average at +128k, little changed from the anaemic pace we had been seen since last fall. Yes, the unemployment rate has been falling thanks to the dwindling ranks of the labour force as those who had been receiving extended jobless benefits fall through the cracks — absent the decline in the participation rate this cycle, the unemployment rate would be sitting at 12% right now. Hence the slowing trend persists in nominal wages in addition to the outright contraction in work-based incomes in real terms.

While companies, in the aggregate, are no longer shedding labour, there is no evidence that either job openings or new hirings are taking hold. The latest Job Opening and Labor Turnover Survey (JOLTS) data for January showed that U.S. job openings dropped 161k, after a 45k decline in December, and now stand at their lowest level since July 2009 when the economy was barely emerging from the worst recession since the 1930s.

New hires also fell 193k and are now down in six of the past seven months — the lowest they have been since October 2009. The fact that layoffs fell 158k during the month offers little consolation but explains why jobless claims have been trending down at a much faster pace than net employment growth has been picking up. The labour market retains a soft underbelly for an economy soon to be heading into a third year of a post-recession recovery, and it is surprising to see the Fed refrain from reiterating this in the FOMC press statement — though perhaps the central bank is trying to send out an early signal that it is not going to be that quick to usher in QE3 once QE2 runs its course in June.
---today
Posted by ibilln at 3:19 PM