David Leonhardt via Brad DeLong: On Capitol Hill, members of Congress are grilling Ben Bernanke, the Federal Reserve chairman, about his attempts to lift economic growth by reducing long-term interest rates — the Fed’s so-called Q.E.2 program... Some members of Congress think Mr. Bernanke is fighting the wrong battle. They want him to take steps to stamp out inflation, which they believe is dangerously high or soon will be. Here is core inflation — economists’ preferred measure of inflation, because it’s more predictive than headline inflation... Krugman adds that core inflation is also less volatile, aka, it's "sticky": Back when I first tried to explain the logic of focusing on core inflation rather than headline inflation, I emphasized the distinction between goods whose prices fluctuate all the time and those whose prices are revised only occasionally; it’s the latter category that is subject to inflation inertia, and therefore where you have to worry that inflation or deflation can get baked into the economy, and become hard to undo.

So here’s what the fixed versus flexible (core vs. headline) price measures of inflation show over the past 5 years. You can see clearly how erratic the flexible prices are, and why it’s better to base policy on the sticky prices. 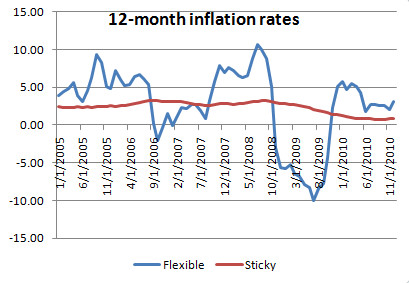