...the perfect storm has hit the equity markets over the past month. However, we had an early warning of such events when, on October 2, 2018, our short-term proprietary model registered a “sell signal” and we said to sell trading positions. Regrettably, our models do not tell us how big a decline is in the offing, or how big the rally will be on a “buy signal.” The perfect storm was caused by a trifecta of news. First, China wanted to hurt the U.S., defend its currency (the renminbi), and boost its economy. As previously stated, China can do this with one maneuver. Sell Treasuries, which raises interest rates in the U.S., hurting the consumer and potentially hurting President Trump right in front of the mid-term elections. When they sell Treasuries, they receive U.S. dollars that can be used to buy renminbi and support their currency. They flush the purchased renminbi into their economy and presto, it hopefully juices it up. Second, the Fed is raising interest rates for multiple reasons. The economy is strong and the Fed is attempting to get to a “neutral rate” in case the economy softens, so they will have some room to lower rates to stave off a recession. And three, did you notice how the equity markets turned sloppy when the “nose counters” said there is near a 100% probability the Democrats will take the House of Representatives?

That trifecta has caused the D-J Industrials (INDU/24688.31) to fall into a “selling stampede.” As often noted, such stampedes tend to last 17-25 sessions. While it is true some have lasted 25-30 sessions, it is rare to see one go for more than 30 sessions. For the record, today is session 18, so the anticipated trading decline should be approaching a decent bottom. In fact, we think the equity markets are near their best “buy spot” since 2016. So let’s assess the damage.

The S&P 500 is now down 8.8% for the month with three sessions left in trading. If nothing changes from here, this will go down as the eighth worst October since the 1920s. Since 1980, this will be the third worst October, only beaten in 1987 and 2008. Regrettably, bad Octobers have tended to be followed by not good Novembers. That would foot with our belief that the mid- November energy peak should mark a significant low for the equity markets. On an upbeat note, December has tended to be a recovery month punctuated by the Santa rally. One thing for certain is that the long-term uptrend line from the February 2016 lows has been broken (chart 1, page 2), as has the same line in the NASDAQ (chart 2, page 3).

The S&P 500 (SPX/2658.69) has declined quickly, and said decline has been extreme. As of mid-week, the index was off about 9.4% from its all-time high in a mere 24 trading sessions. According to our friend at the Bespoke organization:

In the history of the S&P 500, this is only the 19th time that the S&P 500 has declined more than 7.5% from an all-time high (ATH) in less than five weeks (25 trading days). The table (chart 3, page 3) highlights each of those prior occurrences along with the S&P 500’s performance going forward at different intervals over the next year. Over the next week as well as the next one, three, and six months, using both average and median returns, the S&P 500’s return was collectively better than the average for all periods since 1929. . . . Unfortunately, we simply can’t know for sure whether the S&P will bounce back, trend sideways, or continue lower in the months ahead. Anyone that tells you they do know is not to be trusted. We can use history as a guide as we always do, but ultimately the market will move going forward based on how future earnings and economic data plays out based on factors like interest rates, trade policy, etc. All we can really do when we’re leaning more bearish is remain extra vigilant and stay on the side-lines until a more positive trend is established.

Plainly, I agree with the astute folks at Bespoke and would emphasize that I have been on the “sidelines” for trading accounts since the October 2, 2018 “sell signal” from my short-term proprietary model. Our sense remains there will be a significant low around the mid-November energy peak, but the question will be are we going to see a “selling climax” bottom (easy to identify), or a “selling dry up” bottom (much more difficult to identify). The ideal bottoming pattern would be for some kind of sharp “throwback” rally beginning this week, which fails, leading to lower lows into the mid-November energy peak. And that certainly could happen with the SPX majorly oversold with only 10.1% of the S&P 500 stocks above their 50-day moving averages (DMAs), while a mere 32.1% are above their respective 200-DMAs. Likewise, the New Highs over New Lows is deeply oversold on a trading basis.

Of interest is what one savvy portfolio manager told us last week. He thinks that the “machines” (algorithms) have taken over. To wit, when the SPX broke below its uptrend line at 2850, the “machines” were told to go from buying the dips to selling the rallies. In thinking about it, that makes a lot of sense, because when the selling abates and stocks try to “lift,” that lift is met with additional selling. Again, we have seen that reoccurring pattern ever since the SPX broke the uptrend line at 2850 in early October.

The call for this week: We look for a short-term trading bottom this week given the oversold nature of the equity markets. The ideal pattern would be for a sharp throwback rally that fails, leading to new short-term lows around the mid-November energy peak that should mark a major low with stocks trading higher into next year. While I abandoned trading positions on the October 2 “sell signal,” I have not disturbed long-term investment positions, believing we remain in a secular bull market that has years left to run. As our pal Leon Tuey (retired technical analyst extraordinaire) wrote last week:

Great news! The market is grossly oversold and the sentiment indicators are giving super bullish readings (excessive pessimism). On October 8, I opined that the peak selling intensity has been witnessed and the healing process has commenced and investors were advised to redeploy cash, particularly on further weakness. The world is unfolding as it should! Ignore the black headlines and redeploy cash.

On a separate note, and to respond to numerous emails, as of now there has been NO Dow Theory “sell signal.” For that to happen would require the D-J Industrials to break below their March 2018 closing lows, and the D-J Transports would have to confirm with a break below their November 2017 closing lows. This morning, the preopening S&P 500 futures are better by some 10 points on takeover news, as traders play for the expected Monday rally and October performance gaming. 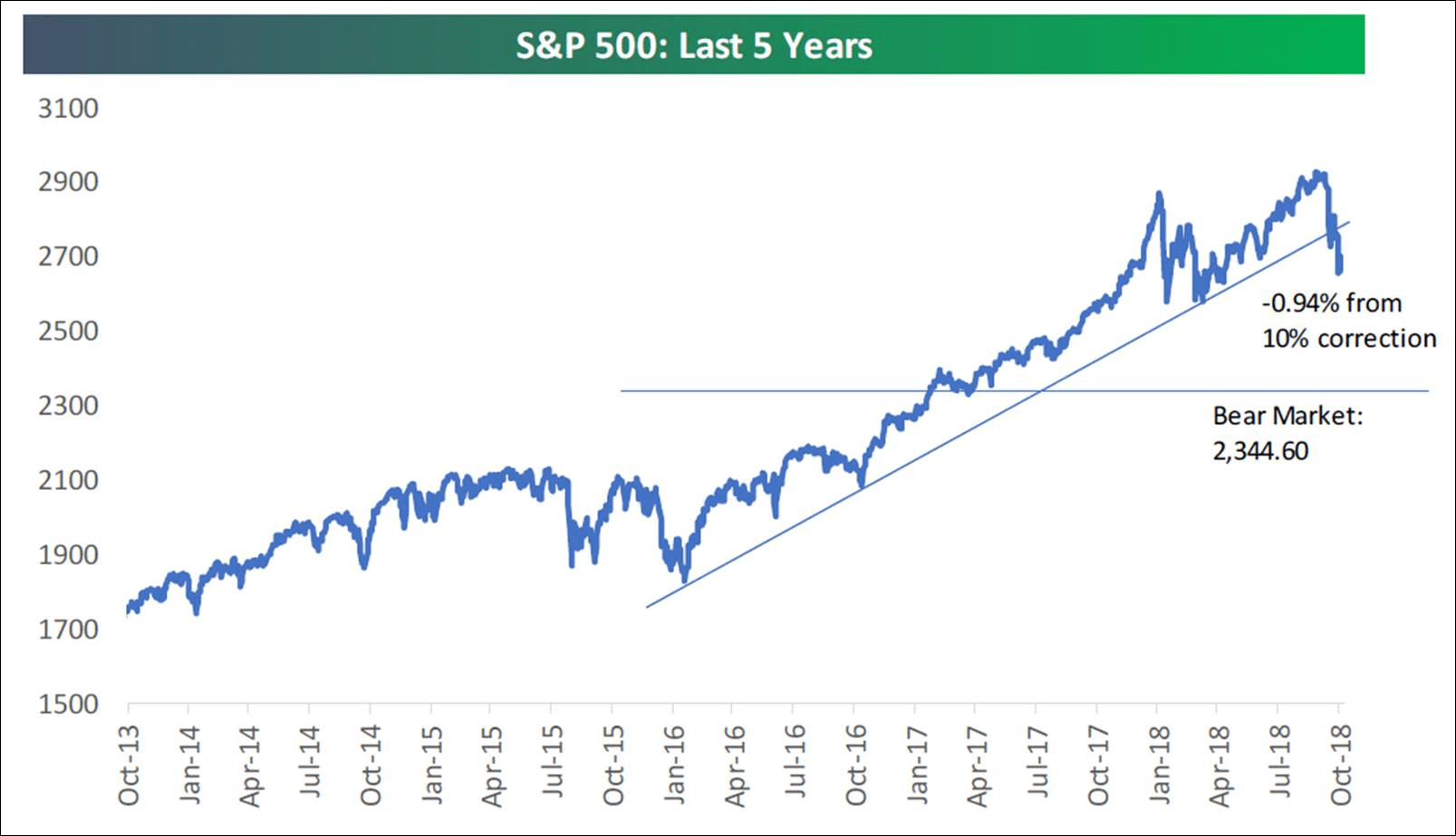 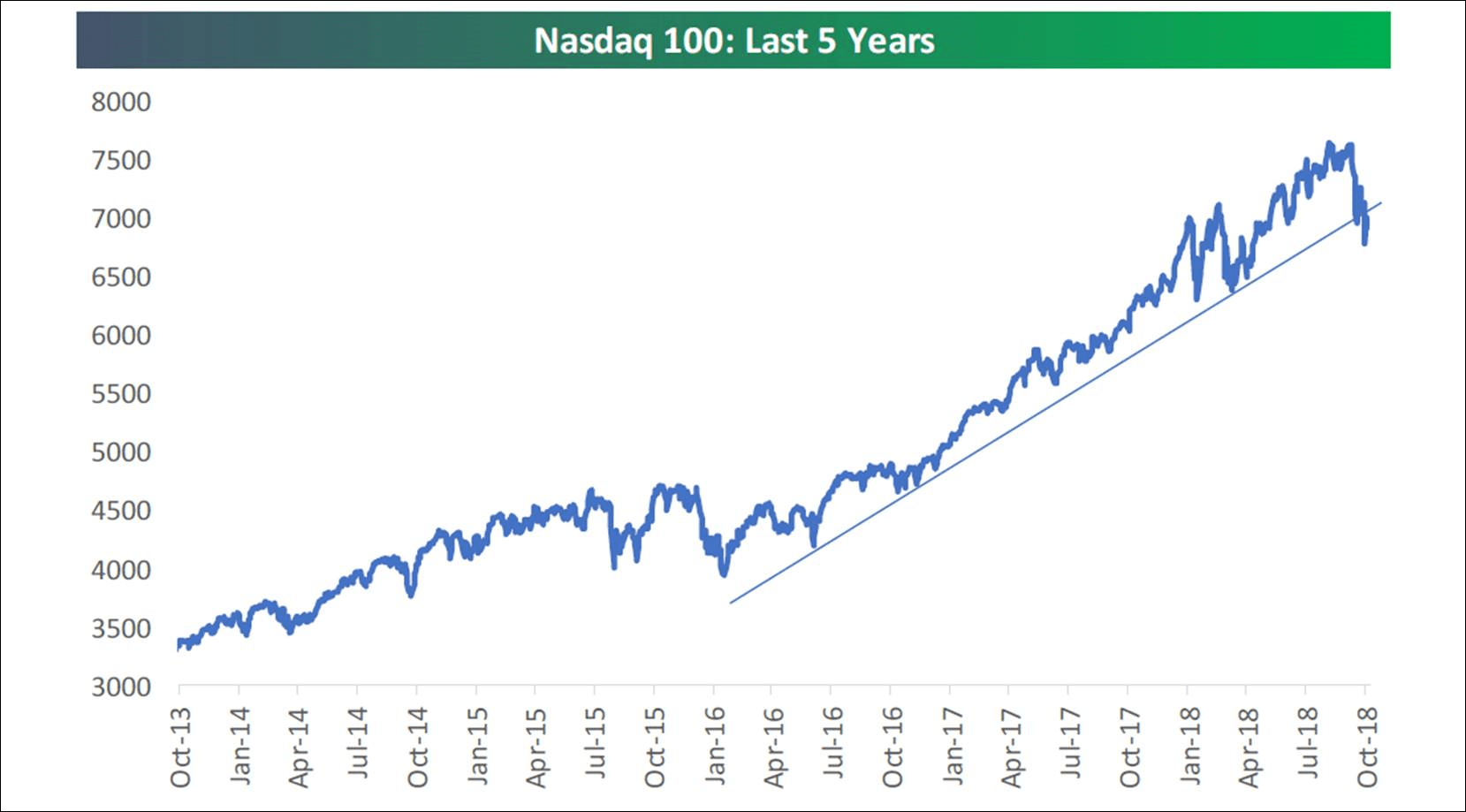 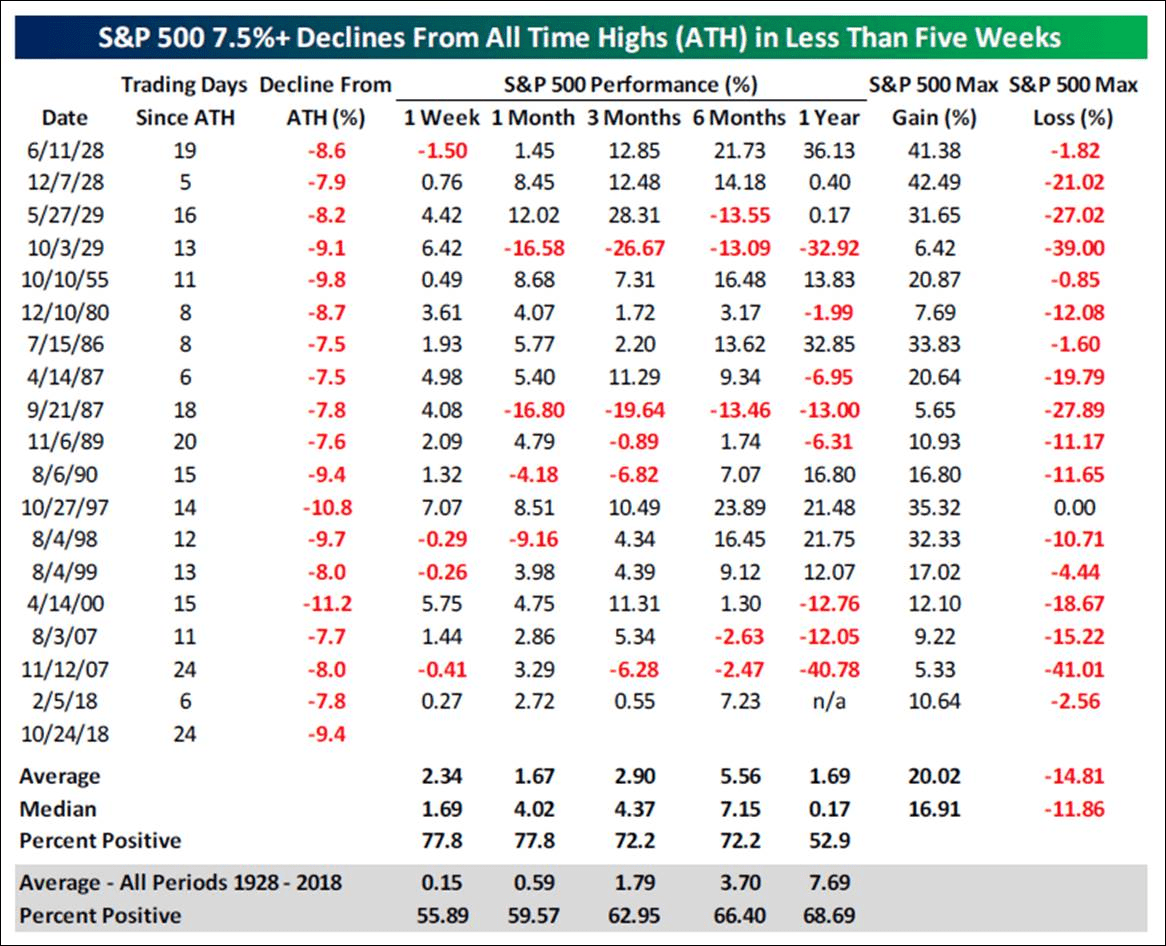 Click here to enlarge
Source: Bespoke Investment Group
Posted by ibilln at 10:37 AM