@mileskimball: Which party do you think has better proposals?

I had a Twitter exchange with Miles Kimball, Professor of Economics, University of Michigan: 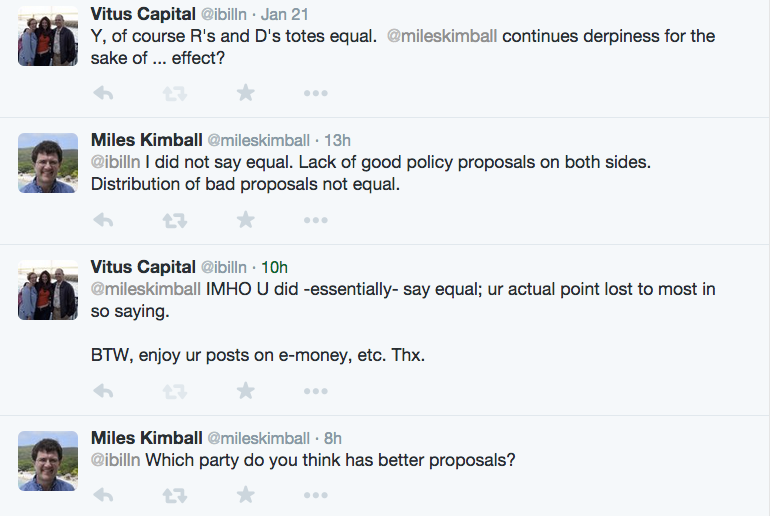 But then...  Dr. Kimball is not dumb - he is no doubt asking in good faith, or something there akin unto.  I decided to write a few things down and send this blog post to him.  Maybe I'll learn something!  Maybe he'll ignore me.
---
What policies of the D's are better than those of the R's?  For example:

A final example I'd give for now is higher education.  America's Research University is the envy of the world, but has been under attack from Republicans for decades.  I, myself, started my journey from republican to democrat because of Reagan's attempt, when he was governor,  to cut the budget of UC Berkeley by 10% unilaterally.  A good discussion of the Research University issue is here.  Dr. Kimball should know about this situation, being a tenured professor at a prestigious university.  If he does not, or if he finds some sophistic way of explaining away what is clear on it's face, then he should be ashamed of himself at least.

In general, there is no act or policy of Republicans which has been stated or proposed since Nixon expanded Social Security and Medicare in 1969, which is not directly, purposefully, and defiantly positioned in a veritable elysian field of a US Tragedy of the Commons.  Four of the original states in the United States call themselves Commonwealths.  So far we have come.

* I don't have time here to give a history of US banking.  This blog has many examples of the failure in the 2000's of US Banking to be congruent with any concept of social relevance.
Posted by ibilln at 8:41 AM