Saut - Excellent recap of the bull case for short/longer term.

Jeff Saut: The drivers of a new secular bull market remain, at least in my opinion, the election of smarter policy makers (and therefore smarter policies), the American Industrial Renaissance, and the Energy Independence theme driven by fracking and horizontal drilling. Those themes are profoundly bullish if you consider the implications of their impacts.

Indeed, in 2008, the Eagles Ford oil production resource was producing 352 barrels of oil a day; now it is producing 536,000+ barrels per day, which is coming close to eclipsing the Bakkan production that is slated to exceed 1,000,000 barrels per day by the end of this year! This energy independence theme is exceptionally bullish given that if we can end our dependence on Mideast oil, it could add 2 to 3 multiple points to our P/E stock market ratios.

Longer term, I think the SPX goes substantially higher, but in the near-term, I think we are making
another short-term "trading top." Interestingly, yesterday's trading action tends to confirm that despite the Dow's Delight (+128). Indeed, yesterday was a fairly strange session with the Dow better by 128 points, while the Dow Transports, the Nasdaq Composite and the Russell 2000 were all down on the session. Moreover, there was a big rotation out of the biggest winning stocks of the year. To be sure, in Wednesday's session the three biggest losing sectors were Transports (-0.71%), Healthcare (-0.33%), and Consumer Discretionary (-0.24%), while Utilities (+1.32%) and Consumer Staples (+1.10%) were the biggest winners. Verily, the 50 SPX stocks that have been up the most this year were down an average of 1.02% yesterday as can be seen in the attendant chart.

The bottom line is that the new bull market high achieved yesterday was not accompanied by all of the metrics I would like to have seen. Thus, yesterday's move appears to be questionable. The Selling Pressure Index actual rose one point yesterday, while the Short-Term Trading Index fell. That is not the kind of action one wants to see when the Dow is better by triple digits. Accordingly, I am again going to respect the timing models, which are looking for a short-term trading peak beginning next week. 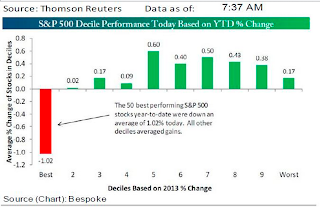