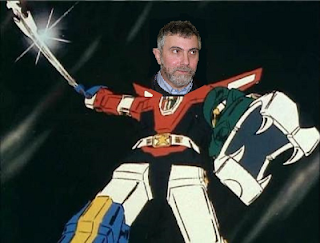 If you grew up in the 80s [Vitus:  80's?  Yikes!] you probably remember Voltron. Although the show often had convoluted plotlines, it would somehow always end with Voltron (a super-powerful robot formed from five mechanical lions) facing off against a monster called a "Robeast". Voltron had plenty of weapons, but he would invariably strike the killing blow with his "Blazing Sword". Eventually the show became kind of routine, but to a four-year-old, it was pure gold.

In the econ blogosphere, a similar dynamic has played out over the last few years. Each week a Robeast will show up, bellowing predictions of inflation and/or soaring interest rates. And each week, Paul Krugman...I mean, KrugTron, Defender of the Blogoverse, will strike down the monster with a successful prediction of...low inflation and continued low interest rates. Goldbugs, "Austrians", New Classical economists, and harrumphing conservatives of all stripes have eagerly gone head-to-head with KrugTron in the prediction wars, and have been summarily cloven in twain.