Our Aug 17 post about housing made a point very much overlooked by the punditry:


there are more houses today then there were five years ago but a full HALF of the primary demand cohort — repeat buyers — died due to negative equity, “effective” negative equity, poor credit or legacy HELOCs, all of which prevent sellers (repeat buyers) from paying a Realtor 6%, putting 10% to 20% down on a new purchase, and getting a mortgage for the remainder.

This week Barron's cover story trumpets that we are basically through the slew of housing despond:


[T]here are unimpeachable signs that this national nightmare is now over. Home prices are starting to rise, if somewhat haltingly, in most areas of the country. And a number of forecasters predict home-price increases around 10% or so nationally over the next three years, with some metropolitan statistical areas, such as Midland, Texas, and Bismarck, N.D., likely riding the energy-exploration boom to better than 20% jumps in residential-real-estate prices. The turnaround, in fact, appears to be arriving exactly on the schedule that Barron's laid out this year in a March 19 cover story entitled "Ready to Rebound."

Of greatest moment, perhaps, was the release two weeks ago of the S&P/Case Shiller Composite 20-City Index that showed a jump in home prices of 2.3% in June over May. Likewise the Case-Shiller National Index in the second quarter rose 6.9% over the first-quarter level, before any seasonal adjustment. And for the first time since the summer of 2010, the National Index actually nosed ahead of the year-earlier quarter's reading, if only by 1.2%...  [Vitus: here is a chart from the article, from Ingo Winzer, president of Local Market Monitor, on estimates for home price appreciation the next three years.] 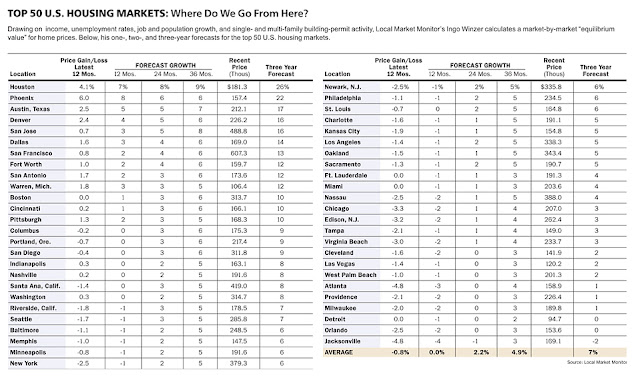 Here's the anticipated "however": Ritholtz:


Barron’s is at it again, making a third call for a Housing recovery since 2008, saying “After an ugly six-year decline, home prices are starting to look up. Why the rebound is for real.”

Beyond the author’s desire to be right (rather than accurate), this latest article has three major flaws/omissions:

Also omitted from this list are several other factors: Weak job creation, flat wages, low household formation. But let’s just discuss these three for today. The article begins with a discussion of home prices, but leaves out the actual, causes (items 1 and 2 above), along with the seasonal elements. Let’s get into the details of these.

Barron’s mentions the drop in distressed home sales as a percentage of total units sold, but astonishingly, leaves out the reason for this: The voluntary foreclosure abatements that took place during the robosigning settlement discussions. The foreclosure machinery was idled for over a year while the resolution of this mass Banking felony was worked out. Its not that the RRE market has improved, rather, its that foreclosures were frozen due to government action. With that now resolved, foreclosures have begun moving higher again. They still appear lower on a year-over-year basis, but only if you ignore the context. The timing of this process is imprecise, but it is not unreasonable to expect significantly more distressed sales showing up before year’s end.

The current result of the abatements is simple: There are 25% less distressed sales than usual. They sell at 20-30% less than an identical home down the block. Distressed sales fell from 38% to 28% of existing home sales. The missing distressed sales account for a significant percentage of home price increases. To discuss distressed home sale and omit this context is, IMO, simply inexcusable.

Noticeably omitted from this discussion is the single most important element driving home sales: Zero percent interest rates, and their impact on Mortgage costs/purchasing power. It is even more astonishing that an article about a home price recovery can omit any mention of the Fed and Ben Bernanke. Mark Hanson has looked at this, and he notes that the Fed’s QE/Twist programs have driven mortgage rates appreciably lower, now down to 3.625% from over 5.0% when the Fed started theirshort term bond purchases. Anyone who uses a mortgage — ~70% of all buyers — have been gifted a 15% increase in purchasing power for a house on the same monthly payment. Despite this huge increase in buying power, home prices are up less than half of this. (Incidentally, I think Hanson is too bearish).

ZIRP and nearly free money are unsustainable conditions, and while we have been told rates will remain low til 2013, they cannot stay at zero forever. What happens to home prices when rates eventually start to rise? I imagine a short term spurt as some buyers rush to take advantage of rates before they increase. After that, the free lunch is over. The support that the Fed has been affording housing (and the banks still festooned with dubious mortgages) flips from a tail wind to a major headwind.

Finally, the Home builder’s issue. The elements that drive their stock prices are very different than what drives home prices. The builders have written-down over-priced land purchases; They have already taken their lumps on their foolish funding of bad buyers. And, they have moved aggressively into the construction of multi-family and rental units — perhaps the hottest sector in residential real estate. We saw the same erroneous logic during the initial phase of the RE crash, from 2006-09 — every uptick in Homebuilder was met with a cheer from the Housing turnaround crew. They were wrong then, and they are most likely wrong now.

I could speak to the decline in inventory, but let me point out what Jonathan Miller of Miller Samuel has explained: A big part of the reason for the inventory decline is low home equity. “Sellers are buyers after they sell, but if they don’t have enough equity for the next purchase, then they sit.” Hence, the decrease in inventory is due to a negative factor — suck sellers. It is not the positive that it appears to be.[Vitus:  See first section of this post]

One last aside, I have to mention this astounding WTF line in the article: “Some keen observers of the real-estate market, such as Moody’s Analytics’ Mark Zandi . . .” Really? Zandi is a very nice guy, but with no disrespect, I do not think there is a single US economist who has been less right about Housing than Zandi. His annual housing bottom calls placed him in our pantheon of PWBC — they have been nothing short of horrific. Anyone who thinks Zandi is a keen observer of real estate is, well, likely to have called a bottom in Real Estate 2008. And 2009, and again in 2012.

The nicest thing I can say about Housing is that after an enormous amount of government & Fed action, it has stabilized. The rate of decline has fallen, but it is driven not by market forces, but unnatural ones.

Meanwhile, back at the ranch, Rosenberg remains as always, extremely skeptical about a housing rebound:


17 August: At odds with ever-rising homebuilders' confidence which seems unstoppable US developers broke ground for more new projects in July than the month prior. Housing starts came in below expectations at 746k annualized units In luly, unable to match the market consensus view of 756K, and down 1.1% from the downwardly revised 754k in June (from 760k previously reported (and May got a modest downward revision too). Now new construction activity [has come] back down to the level where it was three months ago.

Single-family housing starts declined 6.5% in July - the biggest setback since February while multi-unit starts rose 12.4% in July, exactly matching the size of the increase in June. But the recent two months' solid gains an the multi-user segment only came after a 21% piunge in May.

Across the major regions, new home construction was broadly weaker last month than in June: the Northeast was down three of the past four months, by 13% an July; the South was down two of the past three months, by 3.5% July; the West was down 5.3% after a strong 32.5% gain in June, and single family permits also contributed by increasing 4.5%, the fastest growth since February.

On the more positive side, housing permits, which lead starts albeit are much more volatile, jumped 6.8% MOM In July to 812k SAAR - the most monthly permits issued since August 2008 and offsetting more than the declme seen seen in June. Permits issued for multi-structures were the driver with a hefty 11% rise after an 8.5% decline in June, and single family permits also contributed by increasing 4.5% MOM, the fastest growth since February...

23 August: US existing home sales came in below consensus expectations in July, rising 2.3% to 4.47 million units at an annual rate while the market was bracing for a 3.2% bounce-back. Whlle the homebuilding stocks seemed to like the report based on the initial reaction, the reality is that the rebound recouped less than half of the 5.4% slide in June. The median sales price was down 0.8% MOM In Juiy to $187,300, the first decline since January. Inventories of homes available for sale edged higher to 2.4 million, and at the current sales pace it would take 6.4 months to clear the inventories compared with 6.5 months in June.

Vitus, too, remains skeptical about the housing market recovering any time soon.  More than skeptical actually.  However, finally,  we will note that Bill Gross thinks housing is great now, in light of yesterday's QE announcement by the fed:

Uh... didn't Gross (who Vitus loves!) make a rather big mistake in 2011?  But Vitus tends to be sympathetic to Mr. Gross on this one.  Ie, more (and more) QE is the outlier, not discussed above, which could, in Vitus' view, make the Barrons' story finally come true.
Posted by ibilln at 7:25 PM