Consumers are feeling just about as downbeat as producers are. Or so it seems based on the latest surveys. And apparently sentiment is faltering even as home prices carve out an elongated bottom, so it must be something else that's naggng the household sector - lack of job growth perhaps; or squeezed incomes; or a jittery stock market; or a befuddled fiscal policy outlook; or Europe

Indeed. the Conference Board version of U5, oonsumer confidence for June came in weaker than expected — following in the footsteps of the recent University of Michigan poll. The headline came off a downwardly revised 644 (from 64.9) in May to 62 in .lune to stand at the lowest level since lanuary.

Consumer confidence is down in five of the past six months and showing a vivid downward trend since its recent peak in February~ 71.6 in February; 69.5 in March; 68.7 in April; 64.4 in May and 62 in June — this is a most definitive pattern. Keep in mind that historically the average of CB consumer confidence in expansions is 102 and in recessions is 78..

[L]ikely what we have experienced is something like 1933-1936. except that period enjoyed a real V-shaped recovery in the economy — which didn't happen this time around. (Vitus emphasis) 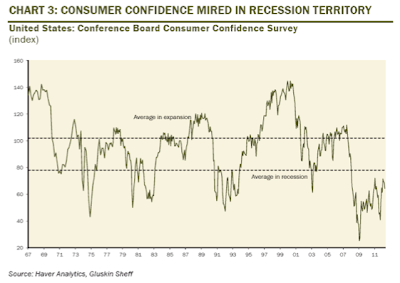