Matthew O'Brien, The Atlantic (Vitus Editing. hat tip DeLong):
There is no euro debt crisis. There is a euro crisis. The debt is a symptom of the crisis of the common currency. Europe's bailed out countries all saw piles of capital pour in during the boom, only to pour out during the bust. They were left with inflated, uncompetitive wages -- and that's sent them into deep slumps...

Europe's non-euro nations, Sweden, Denmark, Norway, Switzerland and the Czech Republic ...all [can] borrow for almost nothing. Investors are actually paying the Swiss and Danish governments for the privilege of lending to them short-term.

Being in the euro means never being able to print your own money. And that turns each euro country into a bank. Imagine a bank run. Fear becomes self-fulfilling. Depositors try to pull their money out before everyone else because they're worried the bank will collapse -- which, of course, causes the bank's collapse. Very Oedipal -- minus the parent love. It's the same with Greece. Investors worry that Greece will run out of euros. That's a very rational fear right now. So they try to sell-off their bonds, which pushes up Greece's borrowing costs -- and makes it more likely that Greece will run out of euros. This kind of panic is why Italy -- which has a primary surplus! -- is flirting with trouble too. Only the ECB can stop this.

Notice that I didn't talk about debt at all in the previous paragraph. The PIIGS have too-high wages, too little growth, and face crippling crises of confidence. Austerity won't cure any of that. It'll make things worse. It has. It kneecaps growth. And investors are more worried about growth right now than they are deficits...

Paul Ryan says we don't have long to avoid the same fate [that of Greece]. Neither does the terrifyingly successful investor Michael Burry. They think that absent drastic reform -- read: cuts -- to the social safety net, we'll end up in penury like the Greeks.

It's a scary story. But it's just a scare story. Yes, we have a long-term healthcare spending problem. But that doesn't make us Greece. Heck, Greece isn't even Greece. At least not the "Greece" that's become such a political football. The evidence -- or lack thereof -- is in the chart below. It compares each country's average social spending the past decade, via the OECD, against its current borrowing costs.* Europe's biggest social spenders don't have any problems. And Europe's biggest problem countries don't spend that much on social programs. The death knell of the welfare state this is not. 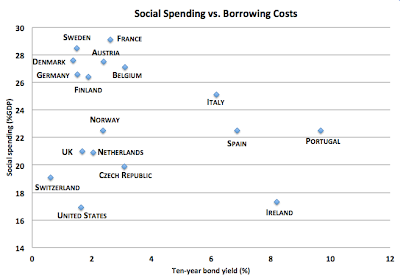 *Caveat: Greece is sui generis. They really did just spend too much money. They're not pictured here, because their 10-year bond yield is -- wait for it -- off the chart. Fitting their 27 percent borrowing costs onto this graph makes it too hard to see anything else. But Greece's average social spending is only 21.4 percent of GDP.
Posted by ibilln at 5:10 PM