Rosenberg last week: Considering what commodities and energy had been doing up until recently this
year, it is remarkable how restrained producer prices were in February. Yes, the
headline was up 0.4%, the largest increase since September of last year, but it
was almost entirely in energy. Outside of that, prices barely rose (+O.1%) and the
three-month trend is running at a non-threatening 1.5% annual rate. In terms of
consumer goods, ex-energy prices were flat for the second time in the past three
months during which the pace slowed to a mere 0.8% annual rate, the lowest
since last May.

Autos and light trucks showed some pretty weak pricing last month. It was very
interesting to see core crude PPI actually deflate 0.3% in February, down now in
four of the past five months and -2.7% on a YoY basis. 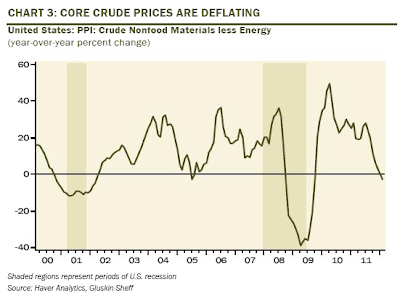