Mitt Romney:  "I will reverse President Obama’s massive defense cuts. Time and again, we have seen that attempts to balance the budget by weakening our military only lead to a far higher price, not only in treasure, but in blood." 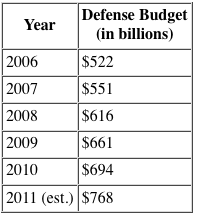 Perhaps he means that President Obama "cut" negative $74 billion from defense spending over the last year. (Remember, a negative minus a negative is a positive.) Or maybe it's the word "massive" we should be focusing on. Could it be, perhaps, that Romney objects to spending on comparatively lightweight drones, instead of more massive aircraft carriers?

Of course, there's one other possibility: Mitt Romney is full of shit. As per usual. ---Daily Kos
Posted by ibilln at 11:24 AM