Rosenberg Daily - The week in housing

today:
The best that can be said about the Case-Shiller index is that it didn‚Äôt come in as bad as the consensus had thought, but even so, the 20-city measure was down 1% yet again (and down in 19 of the 20 cities) on a non-seasonally adjusted basis and off 0.2% seasonally adjusted ‚Äî the seventh decline in a row. Over that time frame prices have fallen at an 8% annual rate, which in wealth effect terms on spending is equivalent to a 15% correction in the equity market. As the chart below shows, we are just 1% away from the price level itself breaking below the April 2009 lows ‚Äî in fact, the last time we had prices decline this much (8%) over a seven-month span was back in June 2009, at the depths of the worst recession since the 1930s.

Demand for home ownership is undergoing a profound structural change. As one would expect considering that one in seven Americans with a mortgage are still either in the arrears process or in outright foreclosure. This, heading into the third year of a statistical economic expansion, is incredible. The fact that Lennar reported a 12% slide in year-over-year orders despite vastly improved affordability levels just about says it all. We could well see even lower lows in single family starts in coming months.

...The sluggish first-time buyer is one of the reasons the housing market can’t move off the ground floor (basement?). Only 34% of existing home sales were accounted for by first-time home-buyers last month whereas a normal market typically sees that ratio closer to 45%. Don’t be fooled by survey data ―mortgage credit standards are tightening and that can be seen vividly in the fact that loans in Freddie Mac’s portfolios now have an average FICO score of 758 from 720 a year ago (as per the USA Today). The best mortgage terms are saved for those with at least a 20% downpayment (there is a whole class of borrowers who have to Google that term since it was stricken from the mortgage market lexicon during the bubble). At the same time, regulators are reportedly going to be mandating that banks maintain a 5% threshold for risk on mortgage securities. Add to that the aggressive move by the House Republicans to wind  down Fanny and Freddie much more quickly than the White House had been proposing (see In Congress, Bills to Speed Unwinding of 2 Giants in today’s NYT). And we just heard from Chicago Federal Reserve Board President Evans that one of the ways the Fed will be shrinking its balance sheet (QE3 does not look like it’s in the cards) would be by selling down its $940 billion cache of mortgage-backed securities. 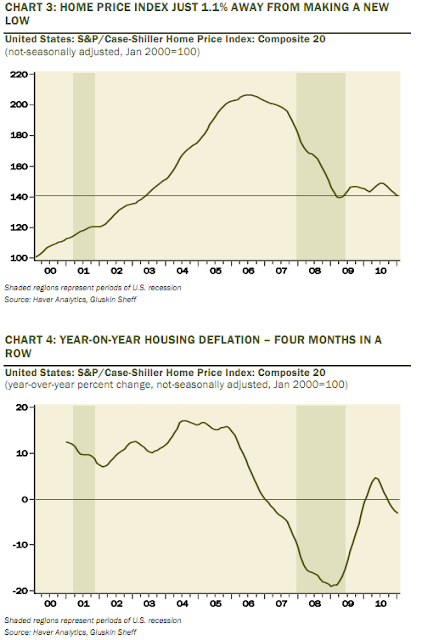