On 1/31 we noted that Peter Boockvar, who blogs at Ritholtz's site, reported an impressive Chicago PMI number.  There he said "Bottom line, the data speaks for itself in that manufacturing continues to be a strong support to the economic recovery but the rise in commodity prices is becoming more of an issue where the rubber now meets the road on whether companies will have success of passing them thru"

Today, he reports on the January ISM, and says it shows basically the same thing:  "Bottom line, mfr’g continues to reflect strong growth but with rising input costs that will be eaten in part and passed on in part"

Meanwhile, back at the Rosenberg ranch, today it's noted that

"The January ISM was a real upside surprise but remember, the ISM peaked last March (data came out April 1st) just ahead of the interim peak of the stock market and it bottomed in July when the market hit its low. The January ISM rose to 60.8 from 58.5 (survey of economists had expected a decline to 58.0). The number of industries reporting growth rose to 14 (out of 18) up from 11 in December, an indication that January’s strength was broad-based...However, we noticed that while the percent of industries reporting employment growth increased to 61% from 56% in December, it wasn’t as high as the reading seen in early 2010 (when the employment index was much lower at around 55), suggesting that gains in employment were more narrowly based. The risk for Friday is that the increase in the ISM sub-component won’t translate to a meaningful increase in manufacturing employment (it’s happened before).

"Also keep in mind that this is a diffusion survey of large companies. So, the responses reflect global business, and not surprisingly the export index jumped to 62 from 55. If orders, employment, and production are strong outside the U.S. where these companies have a presence, those factors will be reflected in the index."

And, this graph.  Is Rosie stretching here? 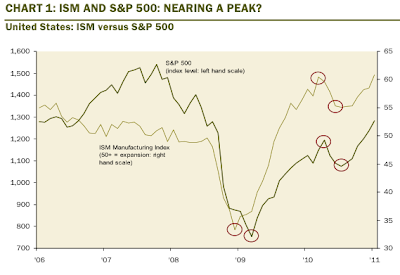