...real organic incomes are under pressure. So with that energy-induced 0.5% MoM hike in the December U.S. CPI, real wages contracted 0.4% and are down now in three of the past four months. The pace over the past six months is now running just 15 basis points north of zero ― well below the 3.6% trend in mid-2010. The three- month trend, which was more than 5% at an annual rate back in mid-2010, has since swung to a -0.5% annualized pace.

The added hurdle is that, according to the University of Michigan Consumer Sentiment survey, household income expectations for the year ahead collapsed nine points in January to an 11-month low of 116. That is in nominal terms. The real story was the similar-sized slide in “real” income expectations from 64 to 55, which puts this index at the third lowest level on record (going back nearly 60 years) ― only lower in the severe 1980 and 2008 recessions.  [yesterday] 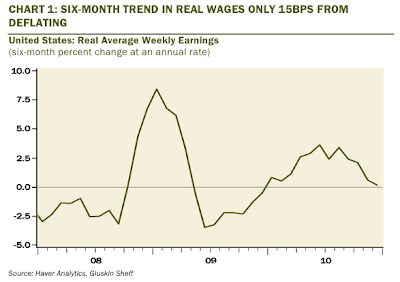