There is no doubt that we are going to see U.S. headline inflation increase in coming months as the effects of higher wholesale food and energy costs kick in, also some apparel price increases, as the surge in cotton percolates. But this by no means suggests a stagflation cycle is ahead — in the past three years we have seen headline inflation as high as +6% and as low as -2%.

The YoY core PCE price trend, at 0.8%, is also below the 1.7% trend at the turn of 2010. Tack on that +0.4% pace in employment costs — the index came out on Friday as well for Q4 — and there is still no evidence of any inflation beyond the boom in the commodity markets. 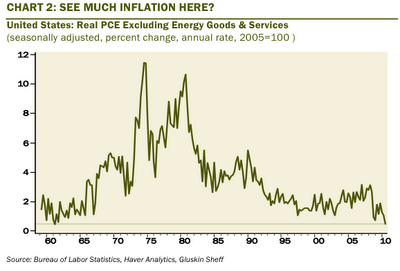 Update:  Plus, if you are into inflation stuff, see this Krugman piece.
Posted by ibilln at 7:14 AM