The 10-year Treasury yield is now approaching its most overbought level (according to its relative strength index) since the summer 2007 yield peak. Other similar overbought periods were at the August 2003 and May 2004 interim yield peaks. Yields declined dramatically from each of these overbought yield peaks and stocks took a break. Bond market sentiment is tied for record lows as well (consensus at 25% bulls) and today’s yield exceeded the 61.8% retracement level from the April yield peak around 4.01%, confirming that the October low of 2.4% was ‘the’ low for some time yet. [today] 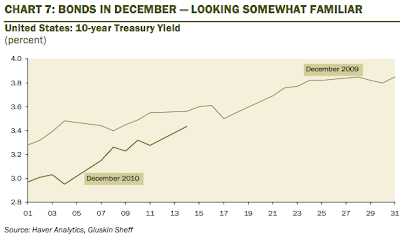