What do you know? Outstanding U.S. consumer credit expanded $3.3 billion in October after eking out a $1.3 billion increase in September. This is the first back-to-back gain since just before Hank Paulson took out his bazooka in the summer of 2008.

Does this mean the credit contraction is over? Hell no. First, the raw not seasonally adjusted data show a $700 million decline.

Once again, it was federally-supported credit (ie. student-backed loans) that accounted for all the increase last month ― a record $31.8 billion expansion. Commercial banks, securitized pools and finance companies posted huge declines ― to the point where excluding federal loans, consumer credit plunged $32.5 billion, to the lowest level since November 2004 (not to mention down a record 9% YoY). Over the past three months consumer credit outstanding net of federal student assisted loans has collapsed $76 billion — this degree of contraction is without precedent.
---Op Cit 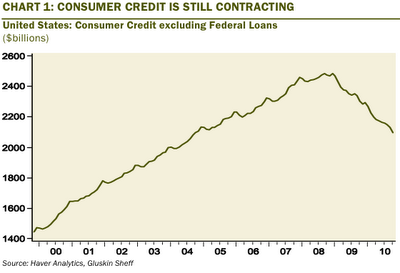