On Friday afternoon, we also received the September release of consumer credit from the Fed. The headlines read how consumer credit rose $2.1 billion in September and pundits were questioning how there could be a credit crunch with net borrowings rising for the first time in seven months. But take a look at the credit data and here is what you see happened in September:
But ... federal government supported consumer credit surged $27 billion, on top of the $26 billion runup in August — completely unprecedented and very likely hooked to public sector financing for student loans (ie, nothing to do with the economy).

In other words, consumer credit outside of government loans is collapsing at an alarming rate — for eight months running and more than $20 billion alone in September.
---Rosenberg 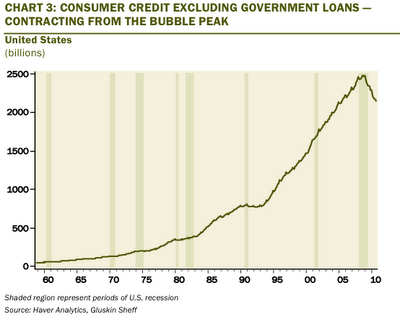