Bruce Web: For years we have been regaled with scary, scary numbers about how Medicare's projected unfunded liability was in the TENS OF TRILLIONS. And sure enough if you consulted the Medicare Report and examined the actuarial projections for Medicare Part A you would find that number. But a funny thing happened with the 2010 Report and is shown in the data table above: the 75 year number is down to $6.9 trillion, a big number but only 0.5% of projected GDP over that period, and the infinite future number is actually a $600 billion SURPLUS.

Oddly this multi-multi trillion dollar turnaround did not result in banner headlines in the NYT or the WaPo, nor did congratulatory telegrams pour into the offices of Nancy Pelosi, Harry Reid and dare I say it Barack Obama from the folk at Cato and Concord that have been weeping bitter, bitter tears about 'intergenerational inequity' and begging us to 'think about the grandchildren'. Because that is not how they roll nor was any of this what the kerfluffle has been about. The fundamental hostility to Medicare among the self-style deficit hawks is not because it is broken, but instead because it works. For them that infinite future $600 billion SURPLUS is terrible, terrible news. Which is why it never made it to the inboxes of Lori Montgomery and Perry Bacon at the WaPo, though you can bet big that any deterioration would have. Funny that.

Brad DeLong:  if the Congress can stick to PAYGO--a very big if--and if the long-run growth news is not bad, then we are done with our long-term deficit 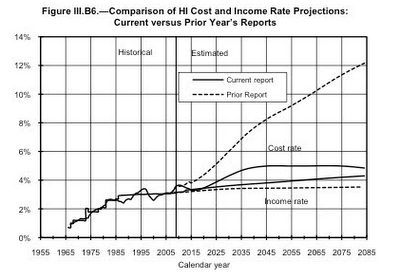