Krugman - Yes, borrow to solve the debt problem: The paradox of deleveraging

When everyone tries to pay off debt at the same time, the result is contraction and deflation, which ends up making the debt problem worse even if nominal debt falls. On the other hand, a strong fiscal stimulus, by expanding the economy and creating moderate inflation, can actually help resolve debt problems...Below are two time series. The first is total US debt from 1929 to 1948 — public plus private — in billions of dollars. The second is total debt as a percentage of GDP: 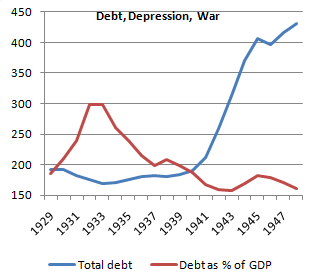 From 1929 to 1933, everyone was trying to pay down debt — and the debt/GDP ratio skyrocketed thanks to contraction and deflation. During and immediately after WWII, there was massive borrowing — but GDP grew faster than debt, and the debt burden ended up falling. [source]
Posted by ibilln at 8:10 AM