Meredith Whitney, via Naked Capitalism, 6/28:  ...points out that consumer credit is tightening, which puts a crimp on small businesses (both via lower revenues and via restricted access to funds), the biggest engine of hiring,

Calculated Risk, 6/7:  The graph shows the year-over-year (YoY) change in consumer credit. Consumer credit is off 3.2% over the last 12 months...Usually there is a fairly sharp increase in consumer credit during a robust recovery - but that isn't happening this time because household balance sheets are still a mess. Just another reminder that the recovery will be sluggish and choppy 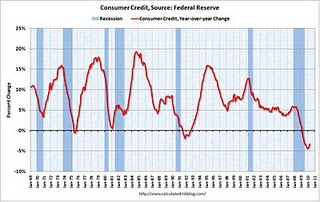 Zerohedge, 6/7:  April consumer credit came in slightly above expectations, at $2,423 billion in April, compared to $2,421.8 billion in March. The March number was interesting as it was revised notably lower from +$2 billion to -$5.4 billion, a revision the likes of which we can probably expect for April once next month's data is released. The April improvement was entirely due to non-revolving consumer credit, as revolving credit declined once again, this time from $835.7 to $829.4 billion. Non-revolving credit increased $1,586.1 to $1,593.6 billion. In terms of MoM changes to key credit holders, the bulk of credit increase came at the Pools of Securitized Assets, which increased credit holdings by $3.9 billion, while Commercial Banks reduced the most of their existing consumer credit. Alas, we don't see how the latter is in any way conducive to reflating the economy if the primary source of consumer credit continues to contract lending.  [My Italic]