The Crisis is Barney Frank's Fault!

Sigh.  The Cato "Institute", and fellow travelers' Line:  Fannie Mae and the Community Re-investment Act, were direct contributors to the financial crisis.

Joe Nocera, New York Times, 6/7: Yes, people got loans who had no hope of paying them back, and that was insane. But Fannie and Freddie’s affordable housing goals — which the G.S.E.’s easily gamed — were not the main reason. Rather, it was the rise of the subprime lenders — and their ability to get even their worst loans securitized by Wall Street —that was the main culprit. Fannie and Freddie lowered their standards mostly because they were losing market share to the subprime originators.”

Barry Ritholtz, 6/13: That is precisely correct. The GSEs were chasing profits and market share. Fannie (and Freddie) were just another crappy bank, no different than Citi or Goldman or Bank of America or Lehman or Countrywide or Merrill or Bear Stearns.

Blaming the government for what are obviously private sector motives is a blatant attempt to exonerate the guilty. I find that intolerable... 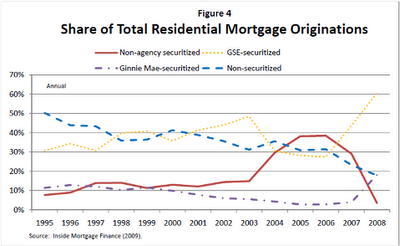