Assuming inflation averages 2% annually and that 2016 marks the end of this secular bear episode (seeing as it began in 2000) then the historical pattern would suggest a test of 5,000 on the Dow as the ultimate trough (at that point, gold will likely be 5,000 too). This does not preclude cyclical rallies along the way, but these will be “bear market rallies” such as we saw from March 2009 to April 2010 and investors should not be tempted into any other strategy than to rent these rallies and not own them.
---Rosenberg, 6/23  (See original for sharper chart image) 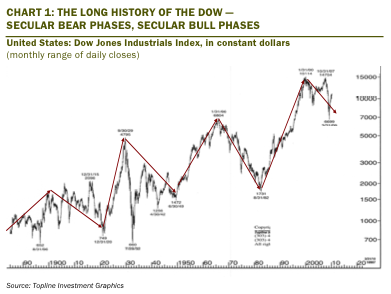