We are near a market top here IMO.
On Thursday, the Dow was up 100 points; Friday, down 125 points; Monday, up 74; Tuesday, up 25.  Volume is average to high.  "Sentiment is wildly bullish now with the ratio of bulls to bears from the Investors Intelligence survey at levels last seen as the market rolled off its cycle highs (bull share up to 51.1% from 48.9% a week ago and the bear share stayed at 18.9%."  (Rosenberg [free subscription required] - I'll quote a bunch from him below).
There is happy-talk everywhere you look.  A surprising example is this article in the New York Times by Floyd Norris, who is an excellent financial journalist who publishes in Barrons, the NYT, and various other places.  CNBC is overwhelmed with happy-talk.
I disagree with the happy-talk mainly because the data regarding the three indicators I have talked about before is still uniformly bad and still getting worse.  These three indicators areas are employment, housing, and consumer credit.  There are zillions of other indicators, prominant ones including the ISM data, Consumer Confidence from the University of Michigan, etc.  For this crisis, I focus on the latter three.
Employment.  Employment is traditionally a lagging indicator of consumer economic activity, which is about 70% of US GDP.  Many however have said that due to the unique nature of this downturn, it's different this time, and (un)employment is now a concurrent indicator.  Regardless, at the present unemployment is at historic highs (except for the year from 7/82 through 6/83, the Volker period).  But it is actually different this time.  Reich  and many others say that this time it's structural - most of the jobs lost recently are not coming back.  More hyperbolic is CK Michaelson:  "A record 44% of the nation's 15 million unemployed have not worked in over six months, and four million of them have been idle for over a year.  Just as the Great Depression scarred a generation, this will leave a mark on all the victims, many for a lifetime.  Most will never regain their career paths, many will never fully recover.  Nor will their children."  I've noted before that we are unlikely to get under 8% top-line unemployment before 2020.  Finally, initial jobless claims for the week ending April 10 were 484K, 44K above expectations and up from 460K the previos week.
To be sure, it is possible to read job statistics at times as being upbeat.  Still, the preponderance of the data is bad.
Housing.  Housing is a classic leading indicator.  With that in mind, 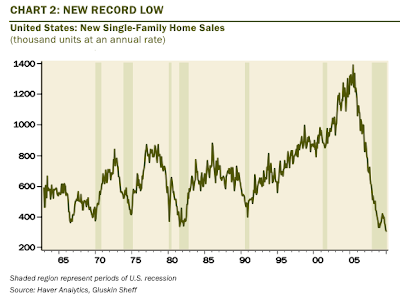 The above points are not the whole story on housing of course.  For one thing, the old saw about housing being always a local phenomenon seems to be re-asserting itself, in that the likes of Phoenix and Las Vegas, etc, are still going down, but, sections of the San Francisco Bay Area seem to have bottomed for now.  Still, the fact is that one has to look very hard to find some sunshine in the housing picture.
Consumer Credit.  One may not like it, one may rail and beat one's breast because of it, but the fact is that the consumer economy we've known since WWII is based on credit, and lots of it.  We can't realistically go back to a WWII economy. 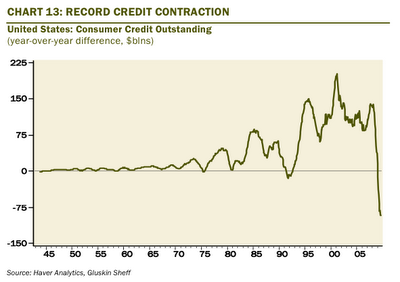 The New York Times says [subscription rqd] "A revival in consumer borrowing and spending is considered crucial to providing support for the overall economy, which is still struggling to emerge from the worst recession since the 1930s."  In the latter article, there is a different version of the data in the chart above.
General.  Although there continue to be green shoots here and there - thus the enthusiasm about the market - the fundamental picture is a downer.  IMO the fundamental problem we have in the society/economy is that large swaths of the middle class are being moved into the underclass.  Although it's a big human problem, it's mainly a long-run economic problem.
We are a vastly long way from becoming a banana republic with the inherent instability and economic perma-fog of such, but banana republicism is without doubt the direction of the US economy since the 80's and certainly in the last ten years.  In constant dollars, the US GDP is up 40+% since 1999, but median household income is flat.  Further, from the employment data, it also looks like we are building a long-term unemployed underclass.  This won't work out well.
After reading about the crisis since early 2008, I've alternated between blaming this, that, and the other guy.  And, between, Yes! - this is the thing we need to do to fix it! ...For several this's.  These days, many on the so-called left (Reich, Johnson), say the fundament issue is that banks are simply too big.  Breaking them up will make them easier to wind down in a crisis.  But, in a real crisis, like the last one, all correlations go to one:  What's the real diff between dealing with 50 medium banks v. 5 big ones?  I'm with Krugman who thinks that the true solution is not clear at this point, but there are at least a few clear things to do.
Why is it not clear what to do?  The recent crisis was a bank run.  Not a run on traditional banks, but a run on the shadow banking system, ie, on the intertwined investment banks; a run on the world of Securitization, CDO's, CDS's, and repo finance.  We've never experienced a shadow bank run before, but because it was not a run on traditional, visible banks, many, esp. those on the right still call for just letting the banks fail, as if they were auto parts stores down the street.  This is a really bad idea; if you think it it's ok, read this.  Shudder.
Investment.  So, what to do, given this happy scenario?  Well, as said, we are actually not going to be a banana republic in any foreseeable future.  With that in mind, the watchword is caution - optimistic caution.  Optimistic in the sense that there in fact are investment opportunities out there in a lot of areas.  Ron Insana, formerly of CNBC, thinks Real Estate is a good long-term bet.  I, myself, will go mostly with my good friend :-)  Rosenberg:

Final note.  "Normal Times".  Paul McCully at Pimco coined the current term for the non-traditional banking system, the "Shadow Banking System".  And, Mohamed El-Erain also at Pimco, coined the current term for the type of economic environment we are in now, the "New Normal".  I think we do have a new normal going.  But what is it going to be like?  There are a number of good thinkers on it, starting with the folks at Pimco.  I think we will have, at least these things
Final final note:  I said in early 09 in one of these Updates that we could see 1200 to 1250 on the S&P as a top.  We've been floating slightly above 1200 for a few days.  I do believe we can hit 1250, but I do also believe it is not worth aggressively chasing that fairly random number.  The fundamentals are douer.
The fly in my douer outlook is that for the most part individual investors are not in the market hugely.  Mutual fund flows show this.  Traditionally, the top does not happen until all the mom's and pop's get in, so that the pros can sell all the stuff the them and then get out.  But this is the "new normal".  Right?
Whew - did not mean for this to be so long.  Hope it was useful.
Posted by ibilln at 9:38 AM