"The only thing certain is uncertainty itself."  -- Bill Northlich.  :-)

Sorry about the recent dearth of Updates.  Lots happening.  I start an Update, then new things happen and I want to say different things.  Etc.
---

The economy and Markets will be in uncertainty mode for the foreseeable future (at least until 2016).  For Markets, it is what Vitally Katsnelson calls a Range-Bound Market environment, and what others call a bear market environment: 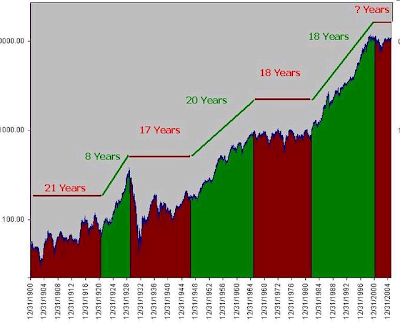 Why do I say this?  I've been harping on this stuff for - ever.  The main themes are problems with
Deficit.  There is lots of bemoanment about the profligate Fed and the deficit.  Paul Kasriel from Northern Trust (an very non-partisan person, and, company) has an excellent recent post which puts the US deficit into a longer term perspective:  "...if you want to worry about government debt problems in the developed economies, I suggest you start with Japan. Its current government debt-to-GDP ratio is considerably higher than what is projected for the U.S...If there is going to be a government debt-induced currency crisis in the next 10 years in a developed economy, my money is on the yen, not the dollar."

Actually, there are a lot of people out there arguing for a bigger deficit, eg, Martin Wolf, here.  (Anti-)Deficit hawks accuse spending proponents of hoping for a “Keynesian free lunch”. Not so, says Wolf:  "The argument is, rather, that the benefits of the higher output today exceed the costs of debt service tomorrow."  The Bill version:  We need more spending to create more jobs, to pay more taxes, to reduce the deficit, to end the recession, to have a nice life.  Not to spend less, reduce taxes, keep the deficit we have for years, create no employment, get really used to recession living.
Investment  The S&P has been flat for over 12 years.  Well, no, it was up quite a bit in the '90's, and in the early 2000's, but to look at the current S&P, you'd think you were in Febuary, 1998.  Thus the chart above.

We are range-bound.  And, especially given the probability of continued serious economic problems ahead (above bullet list, and here), don't generally look for growth, look for income.  As I read the financial press, this is the advice given by most of the pundits whom I admire.  Representative is David Rosenberg. (free login required).  The short list might be:
China  (My opinion of course is that) China is the lynch-pin to the future of the world economy (Key to the puzzle; Canary in the coal mine).  If China crashes or materially slows, the waves will recede, revealing the US to be the only one with any pants on in at a pantless beach.  Thus, dollar will go up, and so will long-term US Treasuries  Gold will tank for a while but, as it is a hedge against uncertainty, basically hold it's own.

If China does not crash, it may slow but it will probably still grow at a reported 8+%.  (!).  That is, hold hands with, not so much Chines stocks, but with the fact that China will continue to be a huge consumer of various commodities, especially oil.  One could invest in commodities specifically, but my thinking now is to invest in the mature economies of Australia, Canada, and Brazil.  Those economies are very involved in natural resource production and they do a ton of business with China, but they are, as said, mature, diversified economies, with the rule of law, etc.
Politics.  My blog has gotten awfully political lately.  I have to change that.  However, in my defense, I will say that, more than usual (whatever "usual" might be), investing is very linked to macro-economic trends, which are very linked to / dependent on politics.  Specifically, the inability of the Senate to take any action on financial reform or on further stimulus (or, on anything else), directly affects your and my investing fortunes.  I'll wean myself away from posting political things on the blog.  Soon, but not now.
Posted by ibilln at 2:05 PM