[Rosenberg] cites a McKinsey report that analyzed 45 other historical examples of deleveraging and found that in the absence of war, default or a move to hyper- inflate, the average length of time the country spends in its deflationary deleveraging phase is seven years in the aftermath if its crisis, and that the total debt/GDP ratio is sliced by one-quarter.
...Chart 5 is total debt divided by nominal GDP...the ratio is at 369% and it peaked in the first quarter of the year at 373%. Slicing this by one- quarter would take the ratio down to 300%, which would mean going back to the levels that prevailed just before the post-WWII secular credit expansion turned parabolic in 2002. That hardly seems Draconian and would still leave the national debt/income ratio well above historical norms. But the process of debt reduction would drain nearly $10 trillion out of the economy. How you come up with a bear market in bonds or inflation under that scenario would require a complete re-write of the economics curriculum across every university and college in the country. 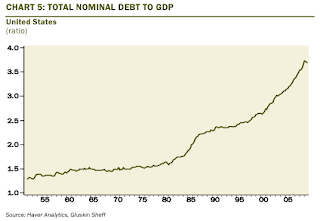