The so-called ‘employment rate’ — the ratio of employment to population — fell 58.2% from 58.5% in November and the cycle peak of 63.4% in 2007. This is extremely significant because what it means is that it would take an expansion in employment of 20 million over the next five years just to get back to those old cycle highs. But here’s the problem — the country has never before managed to come close to creating that number of jobs over a half-decade period, so what the future holds is one of ongoing deflationary labour market pressure as far as the eye can see. 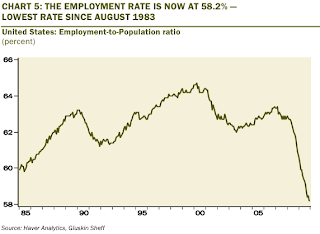 ---Rosenberg, 1/8
Update:
We started the decade with a national payroll level of 130.8 million. We finished the decade practically unchanged at 130.9 million. Meanwhile, the total pool of available labour rose from 146 million to 159 million. In other words, we have the same number of jobs today as we did a decade ago, and yet we also have 13 million more people competing for them. It was more than just a lost decade for the equity market. It was a lost decade for the labour market. Today’s report validated the Fed’s concern over the outlook for employment, which dominated the FOMC minutes released earlier in the week. Those pundits calling for an early exit from the central bank’s accommodative stance may have some reconsidering to do.
Posted by ibilln at 1:21 PM