Deficit: Too much government spending! --Not...

The federal government ran a deficit of $176.4 billion this past October. This compares with a deficit of only $155.5 billion in October 2008. So, between October 2008 and October 2009, the deficit widened by $20.8 billion. Infernal government spending, huh? No, as shown in Chart 2, the year-over-year change in total federal outlays was a decline of $8.7 billion. No, the deficit widened because of a $29.5 billion decline in total federal revenues. 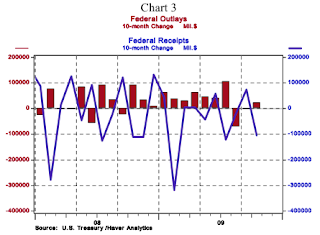 Bill:  Deficit caused by... Recession which originated on Republican/Bush watch, not by irresponsible Democrats.  But these are facts, who cares about facts?
Posted by ibilln at 1:18 PM