China doing well (or at least more), thank you.


In the two weeks leading to this morning's Q4 GDP announcement, a variety of signals have been emanating from Beijing's policy centers, all suggesting the economy was running a little warmer than preferred. ... Considering the figures released this morning, tightening measures will be accelerated in the months to come, but possibly not by as much as is necessary.
The headline GDP figure came in at 10.7% year-over-year, above most expectations. ... 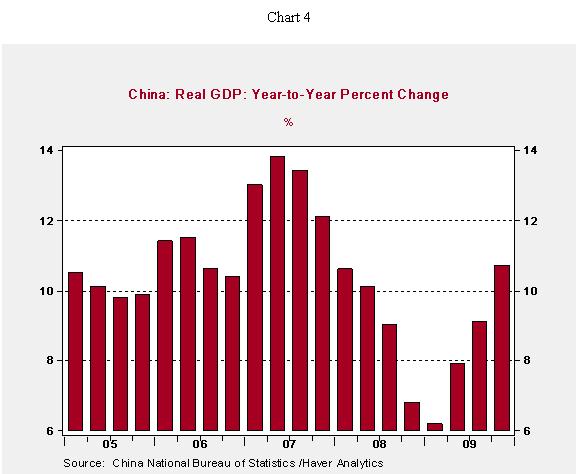 Furthermore, the impact of Beijing's massive economic stimulus package has yet to fully run its course, last year's runaway lending is still feeding into production, and a recovery in overseas demand means the net exports total is a greater contributor to total GDP.... Given the current economic growth trajectory and its implications for prices over the next two quarters, it is hard to see how policymakers would not be concerned about inflation above 5% by June and a real threat of economic overheating.

Bill - 1.  My bold.  2.  Y, so lots of growth in China right now.  Chanos may be right, that China is headed for disaster at some point, but probably not in the near or medium term.  Meanwhile, China-supporting (commodity-producing) economies like Australia, Canada, and Brazil will keep on keeping on, as well as commodities themselves.  I for one am not worried about China near/med term.  I think Chanos (and Mish, and...) are probably right - in 2040.
Posted by ibilln at 9:30 AM