Hello
I feel like the Evil Emperor who, in "The Return of the Jedi", said to Luke and Darth Vader that "Everything is proceeding exactly as I have foreseen" (Muaaaa Ha Ha Ha Ha). That is, shortly before Vader threw him into the reactor.
I'll do my best to avoid the reactor. However, things are proceeding as predicted - for the most part.
Below are some opinions and observations from various sources supporting a long drawn-out painful way-forward scenario for the economy. I've mentioned before the late Peter Bernstein's observation that we compilers of various obscure economic factoids very frequently become enamored of our own (self-perceived) erudition, and in our attempts to out-bad-news the other guy, loose track of the fact that "normal" people, blissfully unaware of their pending doom, busy along happily, finding jobs, starting businesses, and living lives. With that in mind...
Employment is a slow-moving train wreck. You can't have a robust recovery, or, any recovery, with (for example) 20% of prime working-age men out of a job. Official BLS "U6" unemployment, that is unemployment counting discouraged and underemployed workers, is 17+% overall, even given the .2% improvement last month. The point is not the size of the numbers but the amount of unused capacity in the labor pool. Note that the labor pool increases by 100,000 to 150,000 per month due to new entrants. The best that can be said is that we are loosing jobs at a slower rate now. But we are falling behind. An optimistic prediction by Shedlock shows chronic official ("U3") unemployment extending out many years. Typical spreads between official and what I think of as real, (or U6) unemployment are 4-5 points, so the following shows real unemployment at no better than 12% out to 2020 under the best conditions. 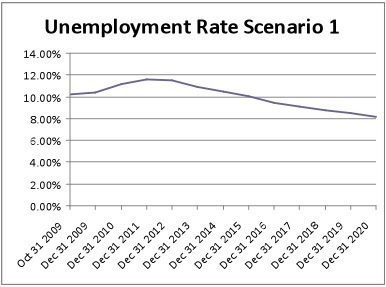 Structurally, the damage to employment will take a Looooong time to fix. Meanwhile, the often-mentioned fact that the consumer is 70% of the economy is inexorably tied to employment.

Housing is a slow-moving train wreck on another track. US homeowners have lost $5.9 Trillion since 2006. No one is unaware of the housing problem, but for perspective, $5.9T is close to half the yearly US GDP. There continue to be upbeat reports of housing "starting to bottom", but there are tons foreclosures still happening (300,000+ in October for the eighth straight month).

But that's not the bad news. There is a wall of Pay-Option-Arms coming due in 2010 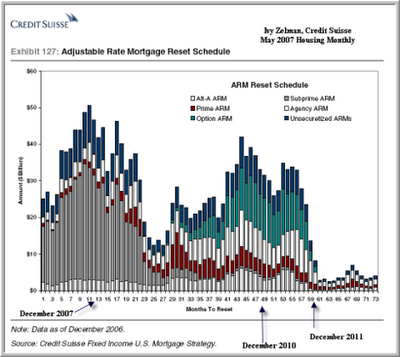 Some of these are being re-financed at lower payments, true. Still, this is a huge issue for late next year, threatening to dump many more houses onto the market.
Then there is a Commercial Real Estate disaster - slowly moving...

Finally, the Credit System is still broken, especially for consumers. Total U.S. bank lending contracted by a record 3% in Q3 and we are now up to 552 banks with combined assets of nearly $350 billion that are deemed to be “in trouble” (ref). Have you tried to get a loan recently? Yes, rates are low (for conforming loans) if you can get a loan. In Ca, unless you live in Merced, most houses are still more than the $417K limit for conforming loans. But low rates are a symptom of a broken system.
Loans are still being "securitized" in the sense that banks don't keep the loans, but rather sell them to FHA and Freddie/Fannie. True, the securitization super-engine driven by surplus world savings is no longer operational, but most banks have lost the ability to make loans for their own books. The old paradigm of banking - "3-6-3" (loan at 3%, charge 6%, be on the golf course by 3pm) is way gone in the era of 0% credit across the economy. Banks simply can't make a profit with such low interest rates at the fed. level. This has been true since ~2002, and is when securitization took off and banks got into the investment business, v. the loan business.

What about all the upbeat comments recently about the economy. Moody's says that the "Financial system crisis [is] close to an end" (which end - :-) ). Jeremy Siegel, perennially optimistic professor at Wharton, (in)famous for his book Stocks for the Long Run, says recently (eg) that
Finally (really), among the reasons for upticks in GDP recently announced is a gain in productivity during the downturn. This gain is simply a result of laying off tons of people. It is unsustainable.
Investment
Now that I've unburdened myself of all the bad news, or, a lot of it, the question is what should one do investment-wise? Here are some main themes.
I've mentioned gold before. Recently gold is down from 1218 to 1125 or 7.6%. Gold could go to 960 and still not break it's uptrend line. But, whatever, gold is volatile. I would still say folks should have 5% exposure to gold. The best thing is to buy physical gold, which is a pain. Alternatively, SGOL is a Swiss ETF which holds physical gold. Gold is widely know/recognized as an inflation hedge. Many say, and I agree, that inflation is years away, despite recent Federal spending. But gold is a hedge against financial instability, inflationary or deflationary. We have the latter now, so I like gold.
Bonds. Corporate high-grade bonds (PBBDX, LQD). Tips (TIP). Even some treasuries (TLO).
Emerging Markets and Commodities. I increasingly think of these as very intertwined. These days I am buying Canada (EWC), Australia (EWA), and Brazil (EWZ) as proxies for commodities themselves. These counties' economies are very commodity-oriented and very attached to the health of the biggies - China and India. On the other hand, BAC (Brazil/Australia/Canada) are developed countries and presumably somewhat less volatile than direct investments in some China fund, eg. That is, as China continues to prosper, so will the BAC's, disproportionately to other asset classes, with less risk.
US Blue Chips. J&J, McDonalds, WalMart, etc. Arguably these have strong foreign components, so you don't need explicit foreign exposure. More importantly, assuming the US economy will not simply blow away, despite the earlier part of this Update, these are the companies which will be earning money and which will continue to exist after the dust - finally - settles.
Well, sorry for the long note. Hope it is of some interest.
Happy Holidays,
Bill
Posted by ibilln at 10:51 AM