Employment - 17-ish percent
Housing - Glut of supply for years; no sales, even with rates under 5%
Consumer Credit Still Contracting.
And Now - the "...develeraging process that began two years ago is really in its infancy stage. The current level of U.S. outstanding nonfederal debt is $27 trillion, which is astounding both in absolute terms and even more so relative to nonfederal GDP — a 206% ratio. It is down fractionally from the 208% peak, but here is the rub. If mean-reversion means that we get back to some norm of the 1990s, then we are talking about the need to extinguish $8 trillion of nonfederal debt. The only question is how this happens, not if. If we’re talking about mean reverting to the very stable trend of the 1960s and 1970s, then the credit contraction is very likely to exceed $11 trillion." 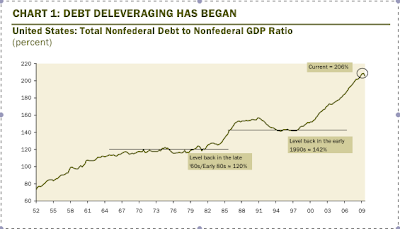